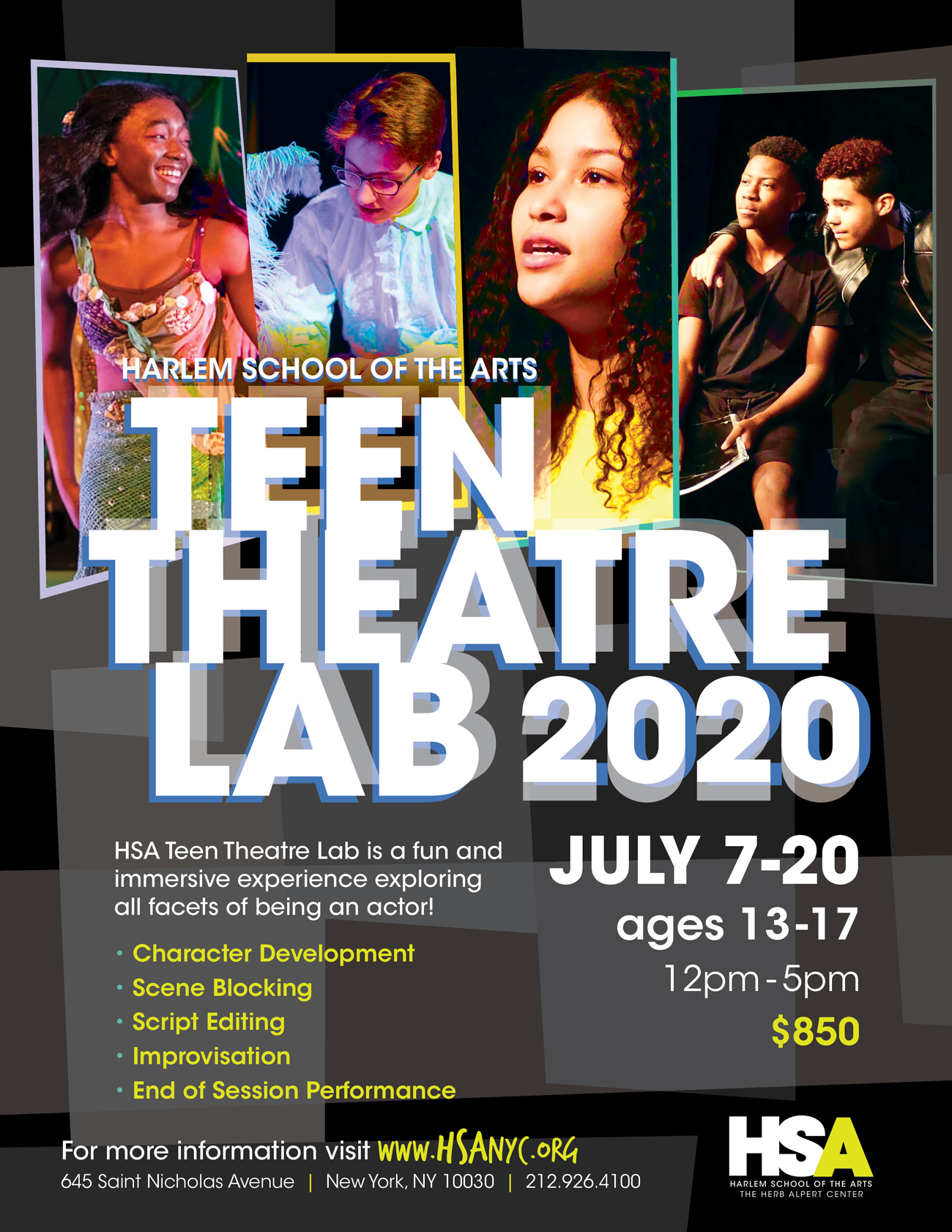 HSA Summer Theatre Intensive is a fun and immersive experience exploring all facets of being an actor. Taught by working professionals and culminating in an original performance based on their own stories and personal experiences. Actors will be involved in character development, blocking scenes, staging their own writing, acting, improvisation and script editing.  Students will also have the opportunity to closely work with an in-house playwright that will be building an original story based on the writing that is produced in the first week. In an effort to shape a well versed actor, students will work with an experienced Vocal performing artist and a Choreographer that will help them develop and shape their performance technique. As a way to link what we teach during this intensive to the real Performance world, there will be field trip opportunities to see live theatre in New York as an ensemble.  The intensive runs for three weeks Monday through Friday, with a final performance open to the public on July 24th at 4pm.

Character Development
Actors learn how to create a character, exploring the change an individual undergoes through the course of a story as a result of the conflict or conflicts that person encounters.

Blocking Scenes
Scene Blocking informs actors where they should move for the proper dramatic effect, ensure sight lines for the audience and work with the lighting design of a scene.

Devising
Actors participate in the process in which the whole creative team develops a show collaboratively. From actors to technicians, everyone is involved in the creative process.

Script Editing
Actors learn how to analyze, provide feedback and edit an original script in preparation for a final performance.

Company
Company is a session where actors put things together through shaping original work and setting rehearsal protocols, exploring writing and devised work. Company is also a place where we discuss the issues and emotional life connected to being an actor and creating work. Company is where our original performance takes shape and comes to life.

Chesney Snow is an award winning New York City based theatre artist known for originating the role of Boxman in the Broadway a cappella musical In Transit. Snow is widely considered a pioneering figure in the world of beatboxing culture with his work American Beatboxer being archived in the Rock and Roll Hall of Fame and Harvard University Hip Hop archive where he was a 3x artist-in residence. His most recent work was in Two River Theater&#39;s production of Oo Bla Dee written by Golden Globe winner Regina Taylor and directed by Tony winner Ruben Santiago-Hudson. He was a composer and lyricist alongside Obie award winner Diedre Murray and Regina Taylor for her production of the muscial Crowns at Princeton University&#39;s McCarter Theatre and the Long Wharf Theatre. He is a recipient of the Drama Desk award and a United States cultural ambassador with the U.S. Department of State. He has spent decades in the field of theatre arts and education, teaching and creating programs in public schools, prisons, hospitals, non-profits, universities, and numerous countries throughout the world. His autobiographical Hip-Hop theatre play The Unwritten Law was co produced by Dixon Place Theatre and was hailed as “Political theatre at it’s best.” by BROADWAYWORLD